My sister Patty’s birthday was last Saturday and I had the opportunity to buy one of the pretty cakes I see at Pick N Save (Actually Metro Market the small but more expensive version of a Roundy’s super market). It was actually a giant cupcake-shaped little cake. When I cut it (after an abbreviated version of Happy Birthday to You without candles since there were no matches in my mom’s new apartment [note to self]) I was horrified to discover that the huge top of the cake was all frosting. In fact, the thing was mostly frosting (only the yellow and dark brown parts were cake) and in my experience people will run screaming from too much frosting.

As it happens the frosting was really sort of good. I hesitate to admit that after complaining about the sweet ravioli. Nonetheless, no one would eat much of it. My father would have been horrified.

I had dinner at Zarletti last Friday night my sister Peggy and my mother. I had the butternut stuffed ravioli with brown butter and sage. It looked glorious, and it was good, but it was too sweet. I didn’t want pumpkin pie. But then again, nothing can be too savory for my taste and much can be too sweet.

I’m thinking my personality is not unlike this.

I got 2 large celeriac roots in my CSA this week. I really have no clue what one does with this but had read a recipe for roasted root vegetables. So I roasted them, along with some carrots, turnips, potatoes, onions and garlic and then I blended it all with chicken stock. It was not terrible but it wasn’t something I’d eat. It tasted vaguely like the chop suey my mother used to make which was just stew with celery and bamboo shoots. In any event, it tasted chinese but without the deliciousness part.

I made it Indian-ish. I added curry powder, ginger, coriander, all the Indian standards. Indian-ish is Ashish’s code word for not-at-all-Indian which is how he regards my attempts at Indian cooking. It’s Indian-ish but not Indian.

Whatever it is, it’s very tasty now.

We didn’t really have any plans for dinner. It was Sunday and not much was open. We were just going to walk around and see what there was. We thought we might eat at an African/Creole place called Uele or something it had nice graphics on the post card we saw but when we got there it was very sterile and modern. I so don’t get that, I wanted something a little more Edgar’s Calypso-y, but in a more open and prosperous format.

We ended up in a Greek restaurant just up the street from Ashish’s apartment. It was really nice. The place was nice and greeky inside, the servers were really nice and the food was, well, greek. Like you’d get in Greece, greek. Ashish had the cucumber yogurt salad which is pretty much what you’d eat in India anyway (so of course he liked that) and I had an awesome greek salad with dolmades, cheese and really excellent peppers. (my mouth is watering)

For dinner Ashish had moussaka which he had never had before, he liked it a lot. Of course, he’ll eat anything with eggplant in it and if cheese is involved, all the better. I had some meat ball sorta things that were pretty good, coulda used some cheese or sauce but hey, when in Greece… It came with some mediocre pasta but there were also 2 french fries. So that made up for any mediocrity.

What is this language??? We ate here last night. It is a lovely little hole in the wall place. Wife doing the serving and husband doing the cooking. They are part of the “slow food” movement. Locally sourced, slowly cooked and apparently also served very slowly. It was a good meal but I am not the most patient of people.

Ashish had some fish in millefeuille that was really really good. I had erwtensoep to start with and then lamsragout with (belgian) endive and potato croquettes. Potato croquettes are when you take the same substance that could become french fries and instead you make a pasty, stick-to-the-roof-of-your-mouth, deep fried log that is relatively tasteless. It was deep fried, of course I ate it.

I loved the place. Ashish wanted to make standing reservations for dinner there. I’d just not want those croquettes again.

My intention was to visit the modern art museum in Gent called SMAK. On the tram as you pass by its general vicinity the android announcer lady says “SMAK en STAM” about 4 times. SMAK is the contemporary museum, STAM is the city museum. When you get off the tram however, there are no signs for either of them. At all. Anywhere. 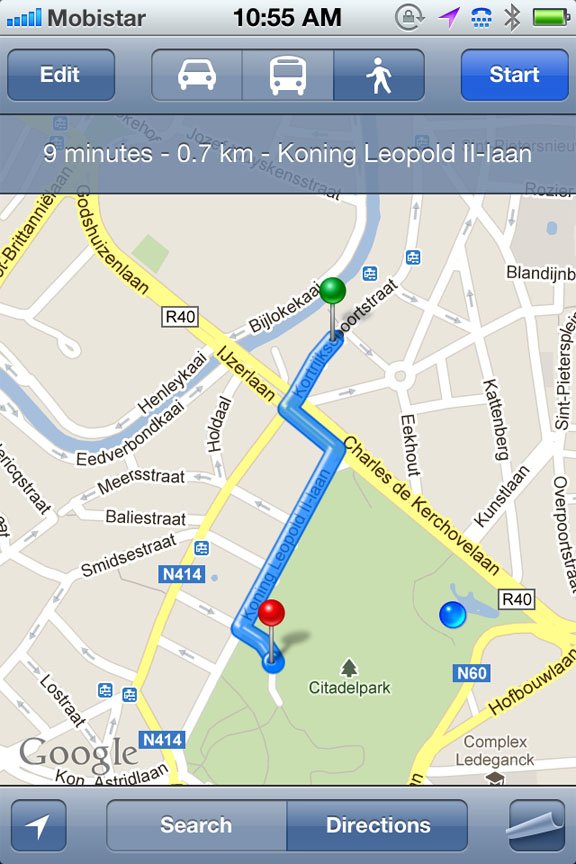 There are not even signs when you, eventually, after walking all over hell and high water with your stupid iPhone giving you all sorts of bad information, ask someone and he explains the way. And even later, when after trudging nervously through woods and cave-ish underpasses that may well be home to a wolf with big teeth dressed like a grandmother (this is Belgium after all) and you run into the same man and he points to the building and says, “Yes, yes, SMAK,” there is no sign. But I went into the building and it was glorious. I spent quite some time looking at the amazing collections of Flemish painters and watched the photographing of the “mystical lamb” something you can pay 5 euros across the street from Ashish’s apt and see.

Anyway, I wasn’t at SMAK. Or, it turns out, STAM. I was at MSK. And that rhymes with nothing but is pronounced, I now know, Emma Ess Kaa. 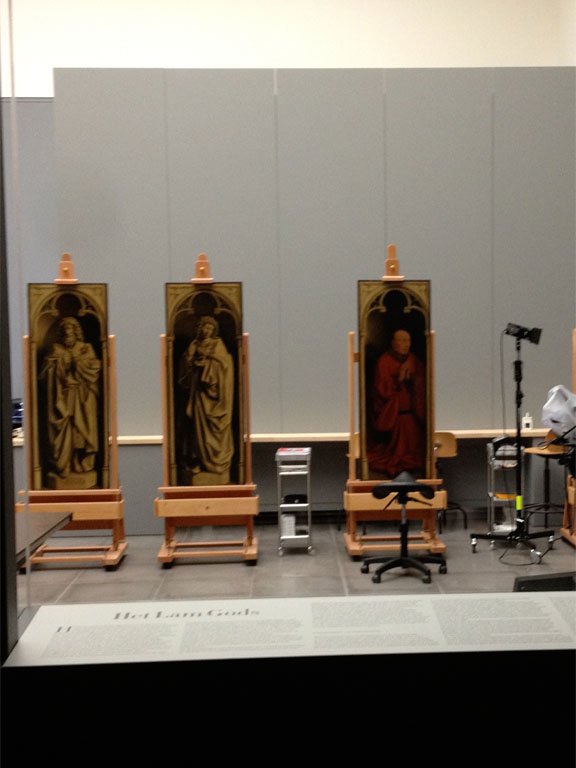 Right about the time I was going to leave it began to POUR. I had no umbrella. It was right then that I decided to eat in their cafeteria if there was one. And indeed there was, an utterly groovy and happenin’ one, and I was happy. I ordered the butternut squash cannelloni, the only vegetarian thing on the menu, not really because it was vegetarian but because I love it. Before the meal they brought me an amuse bouche. Some sort of sea weedy-looking noodley thing in a shot glass. FISHY with a capitol ISH. More of an annoy bouche for me. The thing is, I ordered the only vegetarian thing on the menu and they brought me (without asking) a shrimp appetizer. I’m not complaining. Just saying.

Eventually though, the cannelloni came and it looked and smelled glorious. It wasn’t that good though. And here is the issue, to look good or actually be good. Fernando Lamas used to say it is more important to look good than to feel good. But taste good, I dunno.

This morning Ashish made crepes. One can imagine that a man who has (just guessing here) upwards of 20 copper pots and pans would also have a batter bowl (actually 2), an actual crepe pan and one of those little wooden crepe flattenizers and one would imagine correctly. The crepes were perfectly made (and I should know because last spring Karen and I took an utterly boring crepe-making class) and he filled them with nectarines that he sauteed with a very little sugar. I had mine with the leftover cambozola cheese and a glass of the gazpacho juice, it was an amazing breakfast. Three Zs in that sentence even if I had to make it a run-on sentence to accommodate that idea.

Oh, and there’s a shot of his copper pots in case you didn’t believe me.

My computer is dying. I dropped it as I was leaving Milwaukee. Karen was waiting downstairs in her car to take me to the airport. In a hurry I grabbed my bag somehow incorrectly (I am an idiot) and my computer flew up, out, and flapped onto the floor like a helpless baby bird although its landing wasn’t quite as fluffy. The case bent and its mind has been scrambled. Like Humpty Dumpty. I get the rolling ball of death a lot and iTunes keeps coming on unbidden among other annoying and mysterious problems.

The carnage though, is nothing compared to what occurred at our table last night. Ashish began the meal at Cafe Theatre (as you can see clearly on the plates) with foie gras. I ordered the grilled burratta which is young, soft mozzarella. I’m not sure what the point of grilling it was, it created a warm leather-like topping on the ball of cheese that was not possible to cut without squashing the soft cold cheese underneath it. It was good enough and the tomatoes and pesto were nice. I could have used more bread. I mean, I didn’t really need more bread calorie-wise, but to sop up the oil and pesto and tomato juices. You know, just in case I wasn’t eating enough.

Second course. Ashish ordered steak tartare. On the menu it said they won the Such and Such and So and So Flanders-Brussels award for best steak tartare. Personally they could have won the Nobel, Miss America Pageant and the Grand Prix and I wouldn’t have eaten it but, hey, he’s European now and they eat differently than normal people I’ve noticed.

(The 15 minutes of unrelenting bell ringing at St Bav’s just across the street has just ended. I’m not sure what the purpose of this is aside from pure annoyance. It’s not like we don’t all have access to watches and, say, iPhones [well, not all of us, hey, Peter]. It is 8:45 a.m. now.)

So the steak tartare arrived with a raw egg yolk on top of the big glob of raw meat. So far, so good. I mean, what’s not to set your salivary glands working there, right? Surrounding it were a number of different additives. Chopped parsley, horseradish, onion, mustard and some other stuff that must have tasted good to those judges. And then, the waiter brought over worcestershire, ketchup, celery salt, mayonnaise and tabasco sauce. Ashish did not like the raw egg yolk. At all. Not that I was crazy about it but I wasn’t going to have to eat it. Eventually though, after a good deal of grousing, he mushed it all together put enough tabasco in it to kill small mammals and ate it. It wasn’t bad, it turns out. He liked it. I think he gave it an award too.

I had a very pedestrian steak with oven fries, not the luscious fries they serve with everything here. Love that cone thing though and I was happy to see that bottle of ketchup, not to mention the mayonnaise.

Ashish’s meal also came with “salad”. As far as I’m concerned this type of thing is not salad. It is just a bunch of inedible weedy leaves of varying levels of toughness, aggressive bitterness and potentially unpleasant mouth sensations (I mean, it’s half thistles) covered with a sauce designed to distract you from the obvious issues associated with it.

And just FYI, the bad spacing, weird photo sizes and whatever other formatting issues there are, are not mine. It’s this Blogger program. So there.

The first thing that struck me when I arrived in Lille, France the other day was the bread. First of all, it’s everywhere. There’s a bread store in the train station not as souvenirs, as bread that people take home for dinner. And it’s all lovely and delicious.

I mean Lille is only 45 minutes away from Belgium. Don’t you think there would be a way to move that bread making technology just a few miles into another country? In France the bread tastes the same whether you’re in the north or the south, fully a 7 or 8 hour drive’s difference. Step across the border into Italy and it’s gone. Literally. Just like that. The Belgian bread is much better than the Italian but, well, it’s not French.